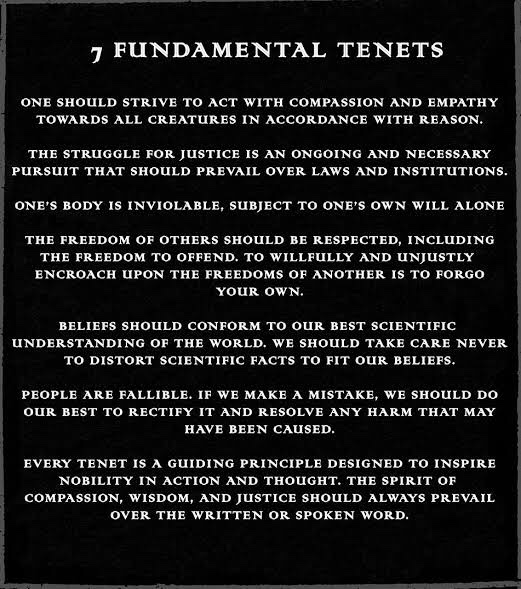 N and I saw Hail Satan! on Friday night, a documentary about the Satanic Temple. Without knowing much about it I’ve been looking forward to seeing it for some time.

While it covered the brief history of this organization and its founders it was, for the most part, focused on the ST’s fight against the imposition of Christianity in public spaces in the US and the meaning of that imposition.

It is the creeping notion of Merica as a Christian nation that they are standing up against. The symbols of a certain type of fundamentalist Christianity which are seeping (and have been for some time) into every form of public life. Prayers in politics and schools, crosses and other symbols in public spaces.

You see Christian theocracy just creeping into our government, and it is our duty to stand up to this.

This film particularly focuses on the Satanic Temple’s stance against the large monument installed in the grounds of the Arkansas State Capitol.  In protest the ST proposed to erect a statue of Bephomet. Their smart, tenacious fight filled me with hope and love.

There are so many scenes in this doco which highlight the differences between the “good” and “godly” Christians and these “evil” Satan worshipers (they’re not). The Satanic Temple people are intelligently and compassionately standing up to idea that America is a Christian nation and fighting for rights of all; for equality and a voice for all people. They are doing so by taking the piss out of the hypocrisy and ridiculousness of the conservatives. It’s shooting fish in a barrel really.

But they are not just taking the piss; they are doing good work. Each chapter, apart from fighting against religious intolerance and control, are doing acts of civil charity.

As an atheist I found this quote from director Penny Lane sums up really well why these people, all of whom are atheists and not devil worshipers, align themselves with this group:

In summary it seems they are fighting fear, prejudice, restriction, superstition and nonsense with their 7 fundamental tenants (see above): compassion, reason, freedom, justice, the right to control one’s own body.

I came out of Hail Satan! filled with joy and optimism. These are my people. The misfits, the oddbods, the brave ones. The ones who want to fight back and will do so intelligently, with humour and heart. If Hail Satan is the opposite of Amen, then Hail Fucking Satan!

5 thoughts on “Hail Satan! A review”