Researching my post I came across this* article about its founder David Walsh and now I have nothing left to write. This article captures so well many of my own thoughts I find it pointless to say much more.

Except to say this place had a profound effect on me. I am the first to shout “the Emperor is naked” when it comes to modern art. I know what I like and I don’t like much. But I fell into this place, like Alice into the rabbit hole and it wove a spell on me.

This quote from the article sums up so much:

“At this point, MONA begins to feel like a mashup of the lost city of Petra and a late night out in Berlin. Everything about it is disorienting and yet somehow familiar, from the high-tech tropes to the low-culture babble, the black humour about so much that is so serious, the attention to aesthetics in a museum unsure if beauty exists or, if it does, if it matters.”

I wouldn’t claim to like or enjoy everything in this place but I can say that most things here were thought provoking and/or emotionally challenging and/or striking in a way which makes them intensely memorable.

There is a lot to be said for benevolent dictatorships and this is why. A place like this is not the work of a committee but of a man who knows what he wants and doesn’t give a crap what others think. A true eccentric who has earnt his money and wants to spend it on the cultural playthings that make him happy.

Reading his story after having visited this amazing place gives me lots of “aha” moments. This man and this place make sense.

It is not just the Museum itself which is impressive; it is the grounds, the positioning, the views. It makes a statement, it’s weird but totally unapologetic. I loved it. I want to go back and visit the Poo Machine. I need another MONA hit. 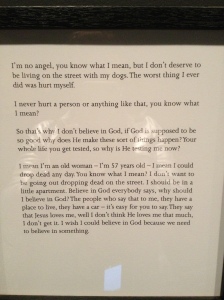 * This is an awesome article. Read it. Really.